What is an Ectopic Pregnancy? Or Ectopic pregnancy meaning 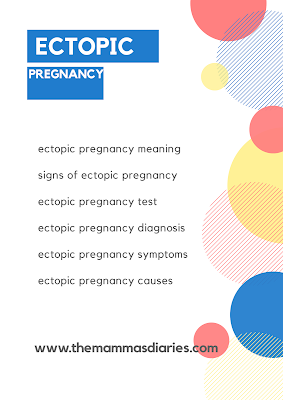 Almost all ectopic pregnancies occur in the fallopian tube and are thus sometimes called tubal pregnancies.

The fallopian tubes are not designed to hold a growing embryo;

Thus, the fertilized egg in a tubal pregnancy cannot develop properly and must be treated.

An ectopic pregnancy happens in 1 out of 50 pregnancies.

If we wants to know what causes an ectopic pregnancy?  Then the answer is Ectopic pregnancies are caused by one or more of the following:

might be  pelvis, abdomen, or even the shoulder or neck . The pain can range from mild, dull to severe and sharp.

Who is at risk for having an ectopic pregnancy?

Risk factors for an ectopic pregnancy include the following:

In these cases, the pregnancy can’t continue normally, and it requires emergency treatment.

Although you may experience typical signs and symptoms of pregnancy,

the following symptoms may be used to help recognize a potential ectopic pregnancy:

It is important to contact your doctor immediately if you are experiencing sharp pain that lasts more than a few minutes or if you have bleeding.

How Is An Ectopic Pregnancy Diagnosed?

Ectopic pregnancies are diagnosed by your physician, who will probably first Perform pelvic exam to locate pain, tenderness, or a mass in the abdomen. Your physician will also use an ultrasound (ectopic pregnancy ultrasound) to determine whether the uterus contains a developing fetus. The measurement of hCG levels is also important. An hCG level that is lower than expected is one reason to suspect an ectopic pregnancy. Your doctor may also test your progesterone levels because low levels could be a sign of an ectopic pregnancy. In addition, your physician may do a culdo-centesis, which is a procedure that involves inserting a needle into a space at the very top of the vagina, behind the uterus and in front of the rectum. The presence of blood in this area may indicate bleeding from a ruptured fallopian tube.

How Is An Ectopic Pregnancy Treated? Or ectopic pregnancy treatment

An ectopic pregnancy may be treated in any of the following ways:

Methotrexate may be given, which allows the body to absorb the pregnancy tissue and may save the fallopian tube, depending on how far the pregnancy has progressed.

What about my future After Ectopic Pregnancy?

Your hCG level will need to be rechecked on a regular basis until it reaches zero, if you did not have your entire fallopian tube removed.

An hCG level that remains high could indicate that the ectopic tissue was not entirely removed, which would require surgery, ectopic pregnancy surgery or medical management with methotrexate.

The chances of having a successful pregnancy after an ectopic pregnancy may be reduced, but this will depend on why the pregnancy was ectopic and your medical history.

If the fallopian tubes have been left in place, you have approximately 60% chance of having a successful pregnancy in the future.

There is a good chance you can have a normal pregnancy again, but it might be hard. You should consider talking to a fertility specialist early, especially if you had a fallopian tube removed. And talk to your doctor about how long to wait before trying again.

Some doctors suggest at least 3 to 6 months. If you’ve already had an ectopic pregnancy, your chances of having another one go up.

What is postpartum depression Birth of your baby can trigger you a many of powerful emotions, like excitement and joy to fear and anxiety also. But it can also result on something you might not expect  too— which is symptoms of depression Most of the new mothers experience...