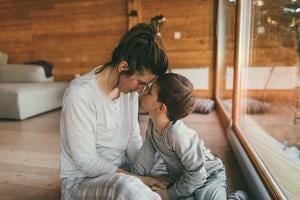 We’ve all been here for the better part of 40 days, at least here in Quebec. Self-isolated, self-quarantined. Doing it for ourselves, for our neighbours, for our elderly relatives. For our healthcare workers. For our country.

We’ve all been home.

But I feel like home has taken on a whole new meaning for some these days; it’s not just a place to come back to at the end of the day. It’s now a place to work, a place to play, to eat, to love, to relax in, to enjoy, and to hate.

Home means so much more than it ever did before.

Last week, a very dear friend of mine who is home with her two young children, came up with a brilliant project idea for her daughter. Since my son and her daughter were in the same class together at school, I decided to jump on the project bandwagon and agreed they would present their projects to each other via FaceTime at the end of the week.

The project was to be a vision board. Basically, whatever our individual children decided to focus on. We gave them guidelines such as; what did they love the most; what was most important to them; what did they dream of being when they grew up; what were they thankful for. Each was handed their own bristle board, crayons, markers and off they went.

Admittedly, my son focused a lot on his LEGO. And he drew a Minion (which is absolutely adorable), and he also drew himself taking a massive jump on his bike and wrote beside it that he dreams of one day taking a jump that large. My mum anxiety took a turn upward upon reading that.

But he also drew two homes.

He drew my condo building and his father’s house. He made sure he got the exterior colours right, and he ensured each was personalized with what you can see through the living room window of each; a little dog on a couch at dad’s and a tiny plant in the window here at our condo.

I asked him why he chose to draw our homes. He said he was thankful for his two homes. Something he’s often said in the past, truthfully. In fact, he likes to brag that he has 5 homes – bringing in the fact that we truly have a village raising this incredible child, and four families who love and care for him together and open their homes to him, and to each other.

Then I asked him why he was thankful for his two homes.

“Because they keep me safe.”

Two months ago, I don’t think this would have been his response. Of course, he’s hearing all the “stay home, stay safe” messages out there, but I think it’s more than that for him now.

Safe in the same home.

It broke my heart to tell him that couldn’t happen. Would never happen.

And in the 6 years since he’s had two homes, he’s never asked for us to all be together like that. Never begged and cried about wanting everyone together. Never wanted us all to be safe. Safe in one home.

As adults, this is a scary time. Terrifying in some ways, really. Not just from a health perspective, but career-wise, financially, mentally. It’s a lot. It’s overwhelming. Now, imagine being a child and having to deal with those same anxieties and fears. Even if your children don’t read the news or listen to the daily Trudeau addresses, they read you. They feed off you. And they are fully aware of your emotional state.

Never was that more clear to me than when my own child told me he was thankful for his homes because they keep him safe.

And it made me reconsider what home means to me.

Home is my family. Home is my mother. My father. My son. My boyfriend. My pets.

I’m missing some of my home every second week, and I’ve been missing a huge part of home for the better part of 40 days. Not being able to hug or spend time with my parents has hit me pretty hard. And my son obviously senses that.

Miranda Lightstone has been a professional writer and editor for the past 15 years. Writing is, undoubtedly, her passion along with her son and of course her two cats, Biscuit and Hobbes and the resident rodent, Sir Hamsalot the hamster. Miranda lives in Vaudreuil with her menagerie, and a very patient and understanding boyfriend.